Most Important Update Things
With CoherentUI not proving to be a viable UI solution for our needs, we decided to go with Unreal Motion Graphics (UMG) integrated into UE4. In the latest update, the first stable version of UMG was released with many of the features needed to create our interface.

Programming has been hard at work on ground targeting systems that will allow for us to aim ranged abilities (think of ground circles to fire an AOE-type ability). Additionally, we are constantly iterating on what we think is the best way to implement the mechanics and features of our game. We will start taking a more prototype-friendly approach to our gamemodes and maps, with more time spent playtesting blockout maps with prototyped features, as opposed to playing existing maps until art starts coming in.

We will begin gearing up for Kickstarter, hopefully to launch sometime during Q1 of 2015. This is a very exciting and stressful time for the team, as many games are made or broken during these times. We want to make sure before it launches, that the goals, tiers and every aspect of the design is air-tight and that you guys will have something tangible to work with to make sure we can provide what we say we will. 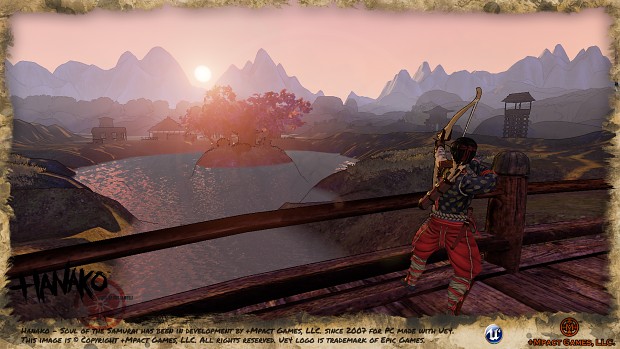 Programming
Beyond what was mentioned above, the programming team is also constantly working on bug fixes and doing polish passes over partial implementations of features and making sure that as we playtest, combat is being resolved and that the team finds it fun and immersive. We don’t want to be married to any one person’s ideas and make sure that as the game evolves and moves forward that if we see new means for better combat we explore those ideas.

Art
The character team is working on our 3rd character that we will begin prototyping, most likely at the beginning of the new year. We will be revealing more on this soon, as we get closer to the Kickstarter launch.

The environment team is wrapping up a few small assets for the Gifu Crossroads map but will begin doing rough blockout meshes for our next map, that also is the first map for our next game mode, which we there are some details on our website, hanakogame.com

Animation
Our animator has mostly finished the first pass of animations for the Archer (mostly quick roughs) so that we have animations representing all of his mechanics and abilities. He has had to step away from the project due to some personal issues, so we hope to fill the animator vacancy as soon as possible so that our production schedule doesn’t require major adjustments.

UI
Our UI programmer/designer will be prototyping all of the interface needs for the game. We will start with simple shapes and buttons/sliders to get the functionality squared away for all of our menus, settings, lobbies, etc. and start filling in art after. The UI will most likely stay in a placeholder state for many months as we start filling in art, starting with the HUD. This is something that will likely come after the KS launches.

Lastly, we’ve been through a lot in the past two months. There’s been a lot of turnover with the team and that’s just the nature of a project that is worked on after-hours. However, we have a resilient and talented team dedicated to getting the game done regardless of what it takes.

Next Week our lead programmer, Ajani will be doing a livestream covering C++ Programming in UE4, so if you’re a fellow dev please follow our Twitch Channel: twitch.tv/hanakogame for notification of when that will go down.

Thank you for reading and for your support!
– Matt